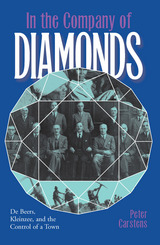 After the 1925 discovery of diamonds in the semi-desert of the northwest coast of South Africa, De Beers Consolidated Mines Ltd. virtually proclaimed its dominion over the whole region. In the town of Kleinzee, the company owns all the real estate and infrastructure, and controls and administers both the town and the industry.

Peter Carstens’s In the Company of Diamonds draws a stark and startling portrait of this closed community, one that analyzes the power and hegemonic techniques used to acquire that power and maintain it.

As a prototypical company town, Kleinzee is subordinated to the industry and will of the owners. Employees and workers are variously differentiated and ordered according to occupation, ethnic variation, and other social criteria, a pattern reflected most markedly in the allocation of housing. Managers live in large, ranch-style houses, while contract workers are lodged in single-sex compounds.

As a community type, company towns like Kleinzee are not entirely unique, and Professor Carstens successfully draws a number of structural parallels with other closed and incomplete social formations such as Indian reservations, military bases, colleges, prisons, and mental hospitals.

Peter Carstens is a professor of social anthropology at the University of Toronto. He was born in South Africa, where he received his academic training. He immigrated to Canada in 1965.