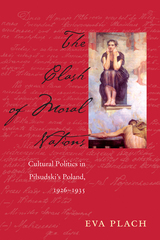 The May 1926 coup d’état in Poland inaugurated what has become known as the period of sanacja or “cleansing.” The event has been explored in terms of the impact that it had on state structures and political styles. But for both supporters and opponents of the post-May regime, the sanacja was a catalyst for debate about Polish national identity, about citizenship and responsibility to the nation, and about postwar sexual morality and modern gender identities.

The Clash of Moral Nations is a study of the political culture of interwar Poland, as reflected in and by the coup. Eva Plach shifts the focus from strictly political contexts and examines instead the sanacja’s open-ended and malleable language of purification, rebirth, and moral regeneration.

In tracking the diverse appropriations and manipulations of the sanacja concept, Plach relies on a wide variety of texts, including the press of the period, the personal and professional papers of notable interwar women activists, and the official records of pro-sanacja organizations, such as the Women’s Union for Citizenship Work.

The Clash of Moral Nations introduces an important cultural and gendered dimension to understandings of national and political identity in interwar Poland.

Eva Plach is an assistant professor of history at Wilfrid Laurier University in Waterloo, Canada.

REVIEWS
“Plach does an excellent job of convincing the reader that her select examples are valuable and insightful. This makes the book—an enlightening look at interwar Poland’s cultural politics—well worth reading by a broad audience.”—Slavic Review


“(T)his is an outstanding analysis of the trauma experienced by Poles in the wake of the realization that independence, on its own account, would not be a guarantee of political stability and national unity.”—The Slavonic and East European Review


“This is an important book, presenting a pioneering, fresh approach to the subject….”—American Historical Review