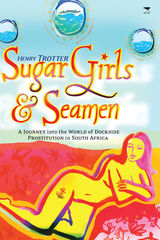 Sugar Girls and Seamen illuminates the shadowy world of dockside prostitution in South Africa, focusing on the women of Cape Town and Durban who sell their hospitality to foreign sailors.

Dockside “sugar girls” work at one of the busiest cultural intersections in the world. Through their continual interactions with foreign seamen, they become major traffickers in culture, ideas, languages, styles, goods, currencies, genes, and diseases. Many learn the seamen’s languages, develop emotional relationships with them, have their babies, and become entangled in vast webs of connection. Henry Trotter argues that these South African women are the ultimate cosmopolitans, the unsung sirens of globalization.

Based on research at the seamen’s nightclubs, plus countless interviews with sugar girls, sailors, club owners, cabbies, bouncers, and barmaids, this book provides a comprehensive account of dockside prostitution at the southern tip of Africa. Through stories, analysis, and firsthand experiences, it reveals this gritty world in all its raw vitality and fragile humanity. Sugar Girls and Seamen is simultaneously racy and light, critical and profound.

Henry Trotter is a doctoral student of African history at Yale University. He lives in Cape Town.