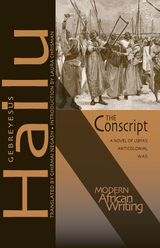 The Conscript: A Novel of Libya’s Anticolonial War
by Gebreyesus Hailu
translated by Ghirmai Negash
introduction by Laura Chrisman

Eloquent and thought-provoking, this classic novel by the Eritrean novelist Gebreyesus Hailu, written in Tigrinya in 1927 and published in 1950, is one of the earliest novels written in an African language and will have a major impact on the reception and critical appraisal of African literature.

The Conscript depicts, with irony and controlled anger, the staggering experiences of the Eritrean ascari, soldiers conscripted to fight in Libya by the Italian colonial army against the nationalist Libyan forces fighting for their freedom from Italy’s colonial rule. Anticipating midcentury thinkers Frantz Fanon and Aimé Césaire, Hailu paints a devastating portrait of Italian colonialism. Some of the most poignant passages of the novel include the awakening of the novel’s hero, Tuquabo, to his ironic predicament of being both under colonial rule and the instrument of suppressing the colonized Libyans.

The novel’s remarkable descriptions of the battlefield awe the reader with mesmerizing images, both disturbing and tender, of the Libyan landscape—with its vast desert sands, oases, horsemen, foot soldiers, and the brutalities of war—uncannily recalled in the satellite images that were brought to the homes of millions of viewers around the globe in 2011, during the country’s uprising against its former leader, Colonel Gaddafi.

Gebreyesus Hailu (1906–1993) was a prominent and influential figure in the cultural and intellectual life of Eritrea during the Italian colonial period and in the post-Italian era in Africa. With a PhD in theology, he was vicar general of the Catholic Church in Eritrea and played several important roles in the Ethiopian government, including that of cultural attaché at the Ethiopian Embassy in Rome, member of the national academy of language, and advisor to the Ministry of Information of the Ethiopian government.

TABLE OF CONTENTS
Translator's Note
Introduction
Preface to the Tigrinya Edition
The Conscript
1. A Portrait of Youth
2. The Departure from Asmara
3. Deep in the Wilderness
4. The Thirst of Death
Biographical sketches