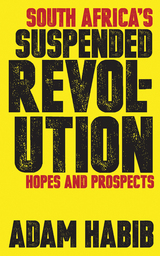 South Africa’s Suspended Revolution tells the story of South Africa’s democratic transition and the prospects for the country to develop a truly inclusive political system. Beginning with an account of the transition in the leadership of the African National Congress from Thabo Mbeki to Jacob Zuma, the book then broadens its lens to examine the relationship of South Africa’s political elite to its citizens. It also examines the evolution of economic and social policies through the democratic transition, as well as the development of a postapartheid business community and a foreign policy designed to re-engage South Africa with the world community.

Written by one of South Africa’s leading scholars and political commentators, the book combines historical and contemporary analysis with strategies for an alternative political agenda. Adam Habib connects the lessons of the South African experience with theories of democratic transition, social change, and conflict resolution. Political leaders, scholars, students, and activists will all find material here to deepen their understanding of the challenges and opportunities of contemporary South Africa.

REVIEWS
“This is a readable, well-informed and perceptive account of the political economy of contemporary South Africa. Although he is clear-eyed about the inequality and poverty that mar the social terrain and the factionalism, corruption and greed that currently affect elite politics, Habib makes a case for specific forms of political leadership, for an active citizenry, and for the possibility of social pacts as paths towards an alternative political agenda.”—Colin Bundy, Honorary Fellow, Green Templeton College, University of Oxford


“Adam Habib is the right person to have undertaken the task that has issued in this book, which he describes as ‘a culmination of at least two decades of debates, reflections and thoughts about resistance in South Africa, its political and socio-economic evolution, and the conundrums and dilemmas relating to the making of this society.’ (p. ix) He has managed ‘to bridge academic and public discourse’ (p. x) while speaking truth to power.…Habib’s book offers a clear narrative, accessible academic analysis and a fair report on the state of the nation.”—African Studies Quarterly


“Adam Habib’s Suspended Revolution provides a ﬁrst-rate introduction to South African politics and it will be a point of reference for future debate. His approach is refreshing and his style is accessible to a range of audiences.”—The Journal of Modern African Studies

TABLE OF CONTENTS
Contents
Preface
Introduction
The state of the nation
Explaining the transition
A brief outline of the book
Governance, political accountability and service delivery
Phase one: the negotiations process
Phase two: finalising the Constitution
Phase three: state centralisation under Thabo Mbeki
The erosion of political accountability
The role of political uncertainty
An electoral system that favours party leaders and the lack of a viable opposition
Behind the service delivery crisis
Corruption
Affirmative action and cadre deployment in the civil service
Inadequate resources
The challenge
The political economy of development
The shift to GEAR
Political polarisation begins
The central contradiction
Groping towards social democracy
Acknowledging changes in economic policy
Contradictory approaches to inequality
The challenge
The viability of a sustainable social pact
Social unionism and South Africa’s first social pact
Understanding the emergence of social pacts
The potential for a social pact in the post-Polokwane era
The challenge
The evolution of state–civil society relations
Historical context
Creating an enabling environment
Counting the costs of neo-liberalism
The state, civil society and the consolidation of democracy
The challenge
South Africa and the world
Foreign policy and second-generation nationalism
South Africa’s foreign policy, 1994–2008
Prioritising Africa
Fostering South–South and other alliances
Increasing the leverage of developing nations
Continuities and discontinuities in foreign policy since 2008
The challenge
What is to be done?
Reform or transformation
Reconstructing political accountability to citizens
Reconciling constitutional rights
Economic growth and inclusive development
Advancing civic and human rights and systemic reform
The necessity of leadership
Reinterpreting democratic and development experiences
Human agency and its structural conditioning
Socio-economic justice in transitional democracies
The battle of interpretation
A progressive nationalism?
Frequently used acronyms and abbreviations
Chapter 1 – Introduction
Chapter 2 – Governance, political accountability and service delivery
Chapter 3 – The political economy of development
Chapter 4 – The viability of a sustainable social pact
Chapter 5 – The evolution of state–civil society relations
Chapter 6 – South Africa and the world
Chapter 7 – What is to be done?
Chapter 8 – Reinterpreting democratic and development experiences
References
Index