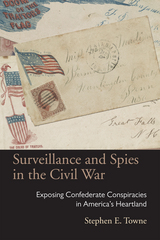 Surveillance and Spies in the Civil War represents pathbreaking research on the rise of U.S. Army intelligence operations in the Midwest during the American Civil War and counters long-standing assumptions about Northern politics and society. At the beginning of the rebellion, state governors in Ohio, Indiana, and Illinois cooperated with federal law enforcement officials in various attempts—all failed—to investigate reports of secret groups and individuals who opposed the Union war effort.

Starting in 1862, army commanders took it upon themselves to initiate investigations of antiwar sentiment in those states. By 1863, several of them had established intelligence operations staffed by hired civilian detectives and by soldiers detailed from their units to chase down deserters and draft dodgers, to maintain surveillance on suspected persons and groups, and to investigate organized resistance to the draft. By 1864, these spies had infiltrated secret organizations that, sometimes in collaboration with Confederate rebels, aimed to subvert the war effort.

Stephen E. Towne is the first to thoroughly explore the role and impact of Union spies against Confederate plots in the North. This new analysis invites historians to delve more deeply into the fabric of the Northern wartime experience and reinterpret the period based on broader archival evidence.

TABLE OF CONTENTS
Contents
Illustrations
Acknowledgments
Introduction
1: "Secret Secessionism in Our Midst"
2: Investigating Desertion and Disloyalty
3: “They Are Doing Us an Immense Amount of Good”
4: An Odious System of Espionage
5: Watching “Mr. Jones”
6: “It Is Impossible to Doubt This”
7: “What I Say about Secret Dangers Is Well Considered and Based on Fact”
8: “When Government Determines to Act”
9: “I Feel Provoked beyond Measure at the Indifference of the President”
10: A “Narrow Escape from a Civil War”
11: “I Make No Assertions without Proof ”
Postscript
Notes
Bibliography
Index