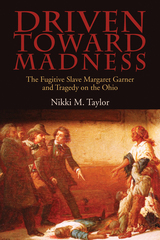 Margaret Garner was the runaway slave who, when confronted with capture just outside of Cincinnati, slit the throat of her toddler daughter rather than have her face a life in slavery. Her story has inspired Toni Morrison’s Beloved, a film based on the novel starring Oprah Winfrey, and an opera. Yet, her life has defied solid historical treatment. In Driven toward Madness, Nikki M. Taylor brilliantly captures her circumstances and her transformation from a murdering mother to an icon of tragedy and resistance.

Taylor, the first African American woman to write a history of Garner, grounds her approach in black feminist theory. She melds history with trauma studies to account for shortcomings in the written record. In so doing, she rejects distortions and fictionalized images; probes slavery’s legacies of sexual and physical violence and psychic trauma in new ways; and finally fleshes out a figure who had been rendered an apparition.

Nikki M. Taylor is a professor of African American history at Howard University. Her other books include Frontiers of Freedom: Cincinnati’s Black Community, 1802–1868 and America’s First Black Socialist: The Radical Life of Peter H. Clark.