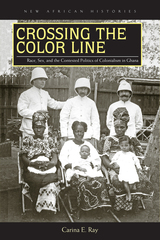 Interracial sex mattered to the British colonial state in West Africa. In Crossing the Color Line, Carina E. Ray goes beyond this fact to reveal how Ghanaians shaped and defined these powerfully charged relations. The interplay between African and European perspectives and practices, argues Ray, transformed these relationships into key sites for consolidating colonial rule and for contesting its hierarchies of power. With rigorous methodology and innovative analyses, Ray brings Ghana and Britain into a single analytic frame to show how intimate relations between black men and white women in the metropole became deeply entangled with those between black women and white men in the colony in ways that were profoundly consequential.

Based on rich archival evidence and original interviews, the book moves across different registers, shifting from the micropolitics of individual disciplinary cases brought against colonial officers who “kept” local women to transatlantic networks of family, empire, and anticolonial resistance. In this way, Ray cuts to the heart of how interracial sex became a source of colonial anxiety and nationalist agitation during the first half of the twentieth century.

Carina Ray is an associate professor of African and Afro-American studies at Brandeis University. She is coeditor of Navigating African Maritime History and Darfur and the Crisis of Governance in Sudan and series editor for New African Histories.