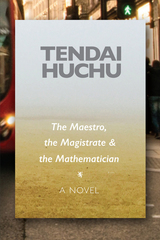 The Hairdresser of Harare, which the New York Times Book Review called “a fresh and moving account of contemporary Zimbabwe,” announced Tendai Huchu as a shrewd and funny social commentator. In The Maestro, the Magistrate & the Mathematician, Huchu expands his focus from Zimbabwe to the lives of expatriates in Edinburgh, Scotland.

The novel follows three Zimbabwean men as they struggle to find places for themselves in Scotland. As he wanders Edinburgh with his Walkman on a constant loop of the music of home, the Magistrate—a former judge, now a health aide—tries to find meaning in new memories. The depressed and quixotic Maestro—gone AWOL from his job stocking shelves at a grocery store—escapes into books. And the youthful Mathematician enjoys a carefree and hedonistic graduate school life, until he can no longer ignore the struggles of his fellow expatriates.

In this novel of ideas, Huchu deploys satire to thoughtful end in what is quickly becoming his signature mode. Shying from neither the political nor the personal, he creates a humorous but increasingly somber picture of love, loss, belonging, and politics in the Zimbabwean diaspora.

Tendai Huchu’s work has been translated into German, French, Spanish, and Italian. His fiction and nonfiction have appeared in Ellery Queen’s Mystery Magazine, Interzone, Wasafiri, and elsewhere. He was shortlisted for the 2014 Caine Prize.