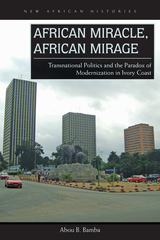 Throughout the 1960s and 1970s, Ivory Coast was touted as an African miracle, a poster child for modernization and the ways that Western aid and multinational corporations would develop the continent. At the same time, Marxist scholars—most notably Samir Amin—described the capitalist activity in Ivory Coast as empty, unsustainable, and incapable of bringing real change to the lives of ordinary people. To some extent, Amin’s criticisms were validated when, in the 1980s, the Ivorian economy collapsed.

In African Miracle, African Mirage, Abou B. Bamba incorporates economics, political science, and history to craft a bold, transnational study of the development practices and intersecting colonial cultures that continue to shape Ivory Coast today. He considers French, American, and Ivorian development discourses in examining the roles of hydroelectric projects and the sugar, coffee, and cocoa industries in the country’s boom and bust. In so doing, he brings the agency of Ivorians themselves to the fore in a way not often seen in histories of development. Ultimately, he concludes that the “maldevelopment” evident by the mid-1970s had less to do with the Ivory Coast’s “insufficiently modern” citizens than with the conflicting missions of French and American interests within the context of an ever-globalizing world.

Abou B. Bamba is an associate professor of history and Africana studies at Gettysburg College.