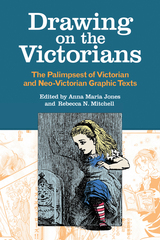 Late nineteenth-century Britain experienced an unprecedented explosion of visual print culture and a simultaneous rise in literacy across social classes. New printing technologies facilitated quick and cheap dissemination of images—illustrated books, periodicals, cartoons, comics, and ephemera—to a mass readership. This Victorian visual turn prefigured the present-day impact of the Internet on how images are produced and shared, both driving and reflecting the visual culture of its time.

From this starting point, Drawing on the Victorians sets out to explore the relationship between Victorian graphic texts and today’s steampunk, manga, and other neo-Victorian genres that emulate and reinterpret their predecessors. Neo-Victorianism is a flourishing worldwide phenomenon, but one whose relationship with the texts from which it takes its inspiration remains underexplored.

In this collection, scholars from literary studies, cultural studies, and art history consider contemporary works—Alan Moore’s League of Extraordinary Gentlemen, Moto Naoko’s Lady Victorian, and Edward Gorey’s Gashlycrumb Tinies, among others—alongside their antecedents, from Punch’s 1897 Jubilee issue to Alice in Wonderland and more. They build on previous work on neo-Victorianism to affirm that the past not only influences but converses with the present.

Anna Maria Jones is associate professor of English at the University of Central Florida. She is the author of Problem Novels: Victorian Fiction Theorizes the Sensational Self. Her recent articles have appeared in Victorian Literature and Culture, European Romantic Review, Criticism, Neo-Victorian Studies, and BRANCH.

Rebecca N. Mitchell is reader in Victorian Literature and Culture at the University of Birmingham. She is the author of Victorian Lessons in Empathy and Difference, coeditor of the anniversary edition of George Meredith’s Modern Love and Poems of the English Roadside, and coauthor, with Joseph Bristow, of Oscar Wilde’s Chatterton: Literary History, Romanticism, and the Art of Forgery.