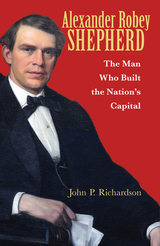 With Alexander Robey Shepherd, John P. Richardson gives us the first full-length biography of his subject, who as Washington, D.C.’s, public works czar (1871–74) built the infrastructure of the nation’s capital in a few frenetic years after the Civil War. The story of Shepherd is also the story of his hometown after that cataclysm, which left the city with churned-up streets, stripped of its trees, and exhausted.

An intrepid businessman, Shepherd became president of Washington’s lower house of delegates at twenty-seven. Garrulous and politically astute, he used every lever to persuade Congress to realize Peter L’Enfant’s vision for the capital. His tenure produced paved and graded streets, sewer systems, trees, and gaslights, and transformed the fetid Washington Canal into one of the city’s most stately avenues. After bankrupting the city, a chastened Shepherd left in 1880 to develop silver mines in western Mexico, where he lived out his remaining twenty-two years.

In Washington, Shepherd worked at the confluence of race, party, region, and urban development, in a microcosm of the United States. Determined to succeed at all costs, he helped force Congress to accept its responsibility for maintenance of its stepchild, the nation’s capital city.

John P. Richardson is a retired intelligence officer, Middle East specialist, and author of a previous study on the West Bank and Gaza Strip. He is an officer of two Washington area historical organizations and lives with his wife in Arlington, Virginia.

TABLE OF CONTENTS
Contents
Foreword
Preface
1: “An Apollo in Form”
2: “The Great Work of Improving and Beautifying Our Beloved City”
3: “We Want an Honest Board of Commissioners and No Broken-down Political Demagogues”
Gallery 1
4: “The Necessity for a Change in the Form of Government for This District”
5: “A Practical Experiment”
6: “Improvements Must Go On”
7: “More Work of Improvement Was Undertaken at Once Than Was Wise”
8: “They Must Have a Republican Boss Tweed for Campaign Purposes”
9: “A Free Man Once More”
Gallery 2
10: “A Life of Labor and Extreme Simplicity”
11: “Anxieties, Expenses, Delays, and Losses”
12: “The Law of Necessity”
Galery 3
Acknowledgments
Note on Primary Sources
Index