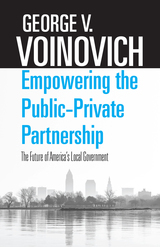 America’s cities are increasingly acknowledged as sites of renewal and economic opportunity—but how can city leaders facing physical and financial constraints harness this positive energy to create sustainable development? The story of Cleveland in the early 1980s provides the necessary roadmap. Mayor George V. Voinovich, by drawing on the combined strengths of the public and private sectors, took Cleveland from financial default to becoming “America’s Comeback City,” and he later used the best practices he developed there to tackle state-level challenges as governor of Ohio. The public-private partnership model that Voinovich pioneered has since become the gold standard for cities seeking to maximize resources.

Using lessons from Cleveland, Voinovich developed this handbook for governments and private entities seeking a mutually enriching partnership. It is his legacy to those who will guide America’s cities to new growth and vitality.

In a career spanning more than forty years, George V. Voinovich held office as mayor of Cleveland and later as governor and US senator for Ohio. Among many other distinctions, he was the only person to hold both the chairmanship of the National Governors Association and the presidency of the National League of Cities. In 1998, Ohio University established what would become the George V. Voinovich School of Leadership and Public Affairs in honor of his many years of public service.

TABLE OF CONTENTS
Contents
Acknowledgment
Introduction
1: Why We Did It
2: The Cleveland Operations Improvement Task Force
3: The Audit
4: The Cleveland OITF and Total Quality Management
5: The Mayor’s Operation Volunteer Effort and How toSustain Your Gains
6: The Pivotal Role of Foundations
Afterword
Notes
Further Reading
About the Author