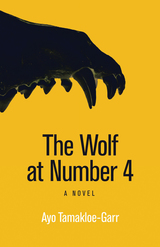 Desire Mensah, a disgraced schoolteacher in her thirties, sees moving to sleepy little Cape Coast, Ghana, as her chance to get away from a shameful secret not buried deeply enough. And maybe, just maybe, she will find the love she craves and the husband her mother craves for her.

But in Cape Coast, the past isn’t dead. It isn’t even past. That’s the kind of thing Wolfgang “Wolf” Ofori would say. Everyone says the eleven-year-old is a genius—eccentric though he is—and is bound to win Wonderkids, a quiz competition ordinarily for high school students. Wolf and Desire form a strange friendship, even as their mutual understanding both precipitates and reinforces the downfall of each. Before long, their struggles to exist in a world that dehumanizes and then throws the first stone whip up a perfect storm, with deadly consequences.

Debut novelist Ayo Tamakloe-Garr drew inspiration from works such as A Streetcar Named Desire and Frankenstein to create The Wolf at Number 4, a story set in 1990s Ghana. The result is a chilling and funny gothic tale that will disarm readers even as it forces them to confront whether the wolves around us are born or made.

Ayo Tamakloe-Garr was born in Accra to a Nigerian father and Ghanaian mother. His short stories have been published on the Flash Fiction Ghana and Writers Project Ghana blogs. The Wolf at Number 4 is his first novel.