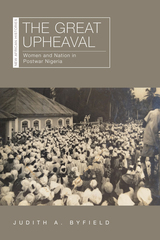 This social and intellectual history of women’s political activism in postwar Nigeria reveals the importance of gender to the study of nationalism and poses new questions about Nigeria’s colonial past and independent future.

In the years following World War II, the women of Abeokuta, Nigeria, staged a successful tax revolt that led to the formation first of the Abeokuta Women’s Union and then of Nigeria’s first national women’s organization, the Nigerian Women’s Union, in 1949. These organizations became central to a new political vision, a way for women across Nigeria to define their interests, desires, and needs while fulfilling the obligations and responsibilities of citizenship. In The Great Upheaval, Judith A. Byfield has crafted a finely textured social and intellectual history of gender and nation making that not only tells a story of women’s postwar activism but also grounds it in a nuanced account of the complex tax system that generated the “upheaval.”

Byfield captures the dynamism of women’s political engagement in Nigeria’s postwar period and illuminates the centrality of gender to the study of nationalism. She thus offers new lines of inquiry into the late colonial era and its consequences for the future Nigerian state. Ultimately, she challenges readers to problematize the collapse of her female subjects' greatest aspiration, universal franchise, when the country achieved independence in 1960.

Judith A. Byfield is a professor of history at Cornell University. She is the author of The Bluest Hands: A Social and Economic History of Women Dyers in Abeokuta (Nigeria), 1890–1940 and coeditor of Global Africa: Into the Twenty-First Century, Africa and World War II, and Gendering the African Diaspora: Women, Culture, and Historical Change in the Caribbean and Nigerian Hinterland.