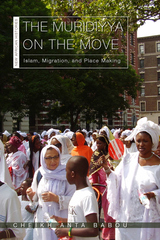 Highlights the role of transnational space making in the construction of diasporic Muridiyya identity.

The construction of collective identity among the Muridiyya abroad is a communal but contested endeavor. Differing conceptions of what should be the mission of Muridiyya institutions in the diaspora reveal disciples’ conflicting politics and challenge the notion of the order’s homogeneity. While some insist on the universal dimension of Ahmadu Bamba Mbakke’s calling and emphasize dawa (proselytizing), others prioritize preserving Muridiyya identity abroad by consolidating the linkages with the leadership in Senegal. Diasporic reimaginings of the Muridiyya abroad, in turn, inspire cultural reconfigurations at home.

Drawing from a wide array of oral and archival sources in multiple languages collected in five countries, The Muridiyya on the Move reconstructs over half a century of the order’s history, focusing on mobility and cultural transformations in urban settings. In this groundbreaking work, Babou highlights the importance of the dahira (urban prayer circle) as he charts the continuities and ruptures between Muridiyya migrations. Throughout, he delineates the economic, socio-political, and other forces that powered these population movements, including colonial rule, the economic crises of the postcolonial era, and natural disasters.

Cheikh Anta Babou is an associate professor of history at the University of Pennsylvania, where he has taught African history and the history of Islam in Africa since 2002. He is the foremost historian of the Muridiyya of Senegal and has published extensively on the genesis of the Murid order, the expansion of the Senegalese and Murid diaspora, and the politics of Sufi Islam in Senegal.