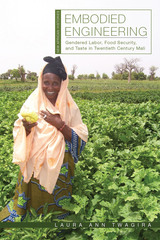 By advocating for an understanding of rural Malian women as engineers, Laura Ann Twagira rejects the persistent image of African women as subjects without technological knowledge or access and instead reveals a hidden history about gender, development, and improvisation. In so doing, she also significantly expands the scope of African science and technology studies.

Using the Office du Niger agricultural project as a case study, Twagira argues that women used modest technologies (such as a mortar and pestle or metal pots) and organized female labor to create, maintain, and reengineer a complex and highly adaptive food production system. While women often incorporated labor-saving technologies into their work routines, they did not view their own physical labor as the problem it is so often framed to be in development narratives. Rather, women’s embodied techniques and knowledge were central to their ability to transform a development project centered on export production into an environmental resource that addressed local taste and consumption needs.

Laura Ann Twagira is an associate professor of history at Wesleyan University. She edited the “Africanizing Technology” special issue for the journal Technology and Culture and was a scholar in residence at the Schomburg Center for Research in Black Culture in New York City.