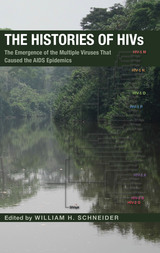 This new collection of essays on HIV viruses spans disciplines to topple popular narratives about the origins of the AIDS pandemic and the impact of the disease on public health policy.

With a death toll in the tens of millions, the AIDS pandemic was one of the worst medical disasters of the past century. The disease was identified in 1981, at the height of miraculous postwar medical achievements, including effective antibiotics, breakthrough advances in heart surgery and transplantations, and cheap, safe vaccines—smallpox had been eradicated just a few years earlier. Arriving as they did during this era of confidence in modern medicine, the HIV epidemics shook the public’s faith in health science. Despite subsequent success in identifying, testing, and treating AIDS, the emergence of epidemics and outbreaks of Ebola, Zika, and the novel coronaviruses (SARS and COVID-19) are stark reminders that such confidence in modern medicine is not likely to be restored until the emergence of these viruses is better understood.

This collection combines the work of major social science and humanities scholars with that of virologists and epidemiologists to provide a broader understanding of the historical, social, and cultural circumstances that produced the pandemic. The authors argue that the emergence of the HIV viruses and their epidemic spread were not the result of a random mutation but rather broader new influences whose impact depended upon a combination of specific circumstances at different places and times. The viruses emerged and were transmitted according to population movement and urbanization, changes in sexual relations, new medical procedures, and war. In this way, the AIDS pandemic was not a chance natural occurrence, but a human-made disaster.

William H. Schneider is professor emeritus of history and medical humanities at Indiana University–Purdue University Indianapolis. He has authored numerous publications on the history of science and medicine, health philanthropy, and global health history.

TABLE OF CONTENTS
CONTENTS
ILLUSTRATIONS
PREFACE
1: THE HISTORIES OF HIVS
2: EXPLAINING THE EMERGENCE OF HIVS
3: THE ORIGINS OF HIVS AND THE EPIDEMIOLOGY OF AIDS
4: FROM CHIMPS TO HUMANS
5: A SOCIAL VIRUS
6: THE CAMEROONIAN PUZZLE
7: THE EMERGENCE AND SPREAD OF HIV-2 IN IVORY COAST AND GUINEA-BISSAU
8: HISTORIES OF HIVS IN BROADER PERSPECTIVE
ABOUT THE CONTRIBUTORS
INDEX