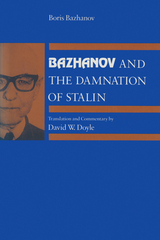 On January 1, 1928, Bazhanov escaped from the Soviet Union and became for many years the most important member of a new breed—the Soviet defector. At the age of 28, he had become an invaluable aid to Stalin and the Politburo, and had he stayed in Stalin’s service, Bazhanov might well have enjoyed the same meteoric careers as the man who replaced him when he left, Georgy Malenkov. However, Bazhanov came to despise the unethical and brutal regime he served. One he decided to become anti–communist, he sought to bring down the regime. Planning his departure carefully, he brought with him documentation which revealed some of the innermost secrets of the Kremlin. Despite being pursued by the OGPU (an earlier incarnation of the KGB), he arrived eventually in Paris, and Bazhanov set to work writing his message to the West. While Bazhanov did successfully escape to the West, Stalin had Bazhanov watched and several attempts were made to assassinate him. Bazhanov may have been fearful for his life much of the time, but he was a man of courage and conviction, and he damned Stalin as often and as publicly as he could.

In this riveting and illuminating book, Bazhanov provides an eyewitness account of the inner workings and personalities of the Soviet Central Committee and the Politburo in the 1920s. Bazhanov clearly details how Stalin invaded the communications of his opponents, rigged votes, built up his own constituency, and maneuvered to achieve his coup d’etat despite formidable odds. he also provides a better understanding of the curiously vapid way in which he other revolutionary leaders, most notably Trotsky, failed to appreciate the threat and let Stalin override them. He reveals how those Soviets with a sense of fairness, justice, and ethics were extinguished by Stalin and his minions, and how the self–centered, protective bureaucratic machine was first built. Bazhanov’s view, at the right hand of Stalin, is unique and chilling.

Bazhanov’s post–defection prediction of Stalin’s continuing and fatal danger to Trotsky shows how well Bazhanov understood the dictator. His formation, in 1940, of an armed force recruited from Soviet Army prisoners to help Mannerheim defend Finland from Stalin’s forces and his 1941 decision to decline the position of Hitler’s Gauleiter of German–occupied Russia are fascinating. But perhaps the most interesting facet to Bazhanov’s tale is the fact that almost no Soviets—even today—know the real story of the Communist party’s criminal acquiescence in Stalin’s rise to, and abuse of, power.