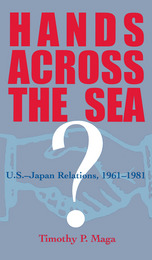 In 1961, the U.S. economy and military remained unassailable in the eyes of the world. Within twenty years, America faced defeat in Vietnam and its economy had been shaken. Japan was now considered the great economic superpower, while the U.S. and Japan reversed roles as surplus and debtor nations. Hands across the Sea? examines this reversal of roles, determining how and why America and Japan became the post-World War II era's most argumentative allies.

Through extensive research in a number of presidential libraries and author interviews with both American and Japanese policy-makers, Professor Maga finds a U.S.-Japan relationship forever troubled by cultural misunderstanding, America's Cold War obsession, Japanese pride, and strangely conflicting goals in both trade and defense. Given the intensity of the arguments over some of these issues, it is remarkable that Washington and Tokyo continued a working dialogue during this critical time.

Hands across the Sea? represents the first in-depth study of the modern U.S.-Japan relationship. It especially discovers how serious the U.S.-Japan disagreements over trade, defense, the direction of the Cold War, nuclear policy, and the environment had become.

Whereas American observers of U.S.-Japan relations are quick to point out their fellow countrymen's ignorance of other cultures and Japan's brilliance in analyzing American policy and life, the evidence suggests otherwise. Steering far away from anyone's political correctness, this book's bottom line involves hard-hitting investigation and analysis.
AUTHOR BIOGRAPHY
Timothy P. Maga is Oglesby Professor of American Heritage at Bradley University. He is the author of several books including The Perils of Power: Crises in Foreign Relations since 1945 and The World of Jimmy Carter.