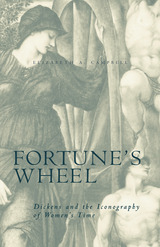 In the first half of the nineteenth century, England became quite literally a world on wheels. The sweeping technological changes wrought by the railways, steam-powered factory engines, and progressively more sophisticated wheeled conveyances of all types produced a corresponding revolution in Victorian iconography: the image of the wheel emerged as a dominant trope for power, modernity, and progress.

In Fortune’s Wheel, an original and illuminating study, Elizabeth Campbell explores the ways in which Charles Dickens appropriated and made central to his novels the dominant symbol of his age. Between 1840 and 1860, a transformation took place in Dickens’ thinking about gender and time, and this revolution is recorded in iconographic representations of the goddess Fortune and wheel imagery that appear in his work.

Drawing on a rich history of both literary and visual representations of Fortune, Professor Campbell argues that Dickens’ contribution to both the iconographic and narrative traditions was to fuse the classical image of the wheel with the industrial one. As the wheel was increasingly identified as the official Victorian symbol for British industrial and economic progress, Dickens reacted by employing this icon to figure a more pessimistic historical vision—as the tragic symbol for human fate in the nineteenth century.

Fortune’s Wheel ably portrays the concept that, in both text and illustrations, images of fortune and the wheel in Dickens’ work record his abandonment of a linear, progressive, and arguably masculine view of history to embrace a cyclical model that has been identified with “women’s time.”

An associate professor of English at Oregon State University, Elizabeth A. Campbell has published articles on Victorian literature in Victorian Studies, Dickens Studies Annual and MLA Approaches to Teaching Middlemarch.