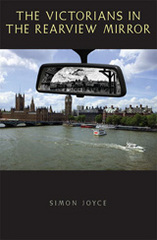 The Victorians in the Rearview Mirror is an in-depth look at the ways that the twentieth century reacted to and reimagined its predecessor. It considers how the Victorian inheritance has been represented in literature, politics, film, and visual culture; the ways in which modernists and progressives have sought to differentiate themselves from an image of the Victorian; and how conservatives (and some liberals) have sought to revive elements of nineteenth-century life. Nostalgic and critical impulses combine to fix an understanding of the Victorians in the popular imagination.

Simon Joyce examines heritage culture, contemporary politics, and the “neo-Dickensian” novel to offer a more affirmative assessment of the Victorian legacy, one that lets us imagine a model of social interconnection and interdependence that has come under threat in today’s politics and culture.

Although more than one hundred years have passed since the death of Queen Victoria, the impact of her time is still fresh. The Victorians in the Rearview Mirror speaks to diverse audiences in literary and cultural studies, in addition to those interested in visual culture and contemporary politics, and situates detailed close readings of literary and cinematic texts in the context of a larger argument about the legacies of an era not as distant as we might like to think.
AUTHOR BIOGRAPHY
Simon Joyce is an associate professor of English and the director of the Literary and Cultural Studies program at the College of William and Mary. He is the author of Capital Offenses: Geographies of Class and Crime in Victorian London.
REVIEWS

“Simon Joyce’s The Victorians in the Rearview Mirror is a good example of academic training put to use in a manner that both contributes to fresh scholarly understanding and at the same time engages in lively and socially useful polemic. The book is so animated because while it has a lot to say about the Victorian period, it’s really about how the period has served and continues to serve as the object of competing urgencies, political and cultural.” —Bruce Robbins, author of Feeling Global: Internationalism in Distress