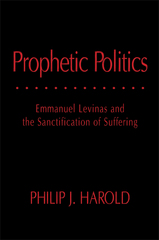 In Prophetic Politics, Philip J. Harold offers an original interpretation of the political dimension of Emmanuel Levinas’s thought. Harold argues that Levinas’s mature position in Otherwise Than Being breaks radically with the dialogical inclinations of his earlier Totality and Infinity and that transformation manifests itself most clearly in the peculiar nature of Levinas’s relationship to politics.

Levinas’s philosophy is concerned not with the ethical per se, in either its applied or its transcendent forms, but with the source of ethics. Once this source is revealed to be an anarchic interruption of our efforts to think the ethical, Levinas’s political claims cannot be read as straightforward ideological positions or principles for political action. They are instead to be understood “prophetically,” a position that Harold finds comparable to the communitarian critique of liberalism offered by such writers as Alasdair MacIntyre and Charles Taylor. In developing this interpretation, which runs counter to formative influences from the phenomenological tradition, Harold traces Levinas’s debt to phenomenological descriptions of such experiences as empathy and playfulness.

Prophetic Politics will highlight the relevance of the phenomenological tradition to contemporary ethical and political thought—a long-standing goal of the series—while also making a significant and original contribution to Levinas scholarship.