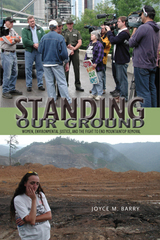 The Appalachian women featured in Barry’s book have firsthand experience with the negative impacts of Big Coal in West Virginia. Through their work in organizations such as the Coal River Mountain Watch and the Ohio Valley Environmental Coalition, they fight to save their mountain communities by promoting the development of alternative energy resources. Barry’s engaging and original work reveals how women’s tireless organizing efforts have made mountaintop removal a global political and environmental issue and laid the groundwork for a robust environmental justice movement in central Appalachia.

Joyce M. Barry is a visiting assistant professor of women’s studies at Hamilton College. Her work has received support from the National Endowment for the Humanities and has appeared in such national publications as Women’s Studies Quarterly, Environmental Justice, Environmental Ethics, and the National Women’s Studies Association Journal. Barry grew up in West Virginia’s southern coalfields, and now resides in Clinton, New York.

TABLE OF CONTENTS
Acknowledgments
Introduction
1. Living in a Sacrifice Zone
2. Gender and Anti–Mountaintop Removal Activism
3. Remembering the Past, Working for the Future
4. Saving the Endangered Hillbilly
Gallery
5. Situating the Particular and the Universal
Notes
Selected Bibliography
Index