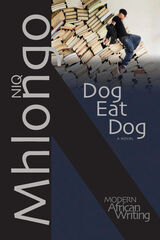 Dog Eat Dog is a remarkable record of being young in a nation undergoing tremendous turmoil, and provides a glimpse into South Africa’s pivotal kwaito (South African hip-hop) generation and life in Soweto. Set in 1994, just as South Africa is making its postapartheid transition, Dog Eat Dog captures the hopes—and crushing disappointments—that characterize such moments in a nation’s history.

Raucous and darkly humorous, Dog Eat Dog is narrated by Dingamanzi Makhedama Njomane, a college student in South Africa who spends his days partying, skipping class, and picking up girls. But Dingz, as he is known to his friends, is living in charged times, and his discouraging college life plays out against the backdrop of South Africa’s first democratic elections, the spread of AIDS, and financial difficulties that threaten to force him out of school.

Niq Mhlongo was born in 1973 in Soweto, South Africa. He is the author of Dog Eat Dog and After Tears, both published by Ohio University Press in its Modern African Writing series. Mhlongo lives in Soweto.