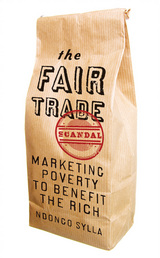 This critical account of the fair trade movement explores the vast gap between the rhetoric of fair trade and its practical results for poor countries, particularly those of Africa. In the Global North, fair trade often is described as a revolutionary tool for transforming the lives of millions across the globe. The growth in sales for fair trade products has been dramatic in recent years, but most of the benefit has accrued to the already wealthy merchandisers at the top of the value chain rather than to the poor producers at the bottom.

Ndongo Sylla has worked for Fairtrade International and offers an insider’s view of how fair trade improves—or doesn’t—the lot of the world’s poorest. His methodological framework first describes the hypotheses on which the fair trade movement is grounded before going on to examine critically the claims made by its proponents. By distinguishing local impact from global impact, Sylla exposes the inequity built into the system and the resulting misallocation of the fair trade premium paid by consumers. The Fair Trade Scandal is an empirically based critique of both fair trade and traditional free trade; it is the more important for exploring the problems of both from the perspective of the peoples of the Global South, the ostensible beneficiaries of the fair trade system.

Ndongo Sylla is a Senegalese researcher for the Rosa Luxemburg Foundation and holds a Ph.D. in development economics.