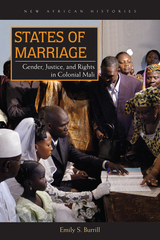 States of Marriage shows how throughout the colonial period in French Sudan (present-day Mali) the institution of marriage played a central role in how the empire defined its colonial subjects as gendered persons with certain attendant rights and privileges. The book is a modern history of the ideological debates surrounding the meaning of marriage, as well as the associated legal and sociopolitical practices in colonial and postcolonial Mali. It is also the first to use declassified court records regarding colonialist attempts to classify and categorize traditional marriage conventions in the southern region of the country.

In French Sudan, as elsewhere in colonial Africa, the first stage of marriage reform consisted of efforts to codify African marriages, bridewealth transfers, and divorce proceedings in public records, rendering these social arrangements “legible” to the colonial administration. Once this essential legibility was achieved, other, more forceful interventions to control and reframe marriage became possible. This second stage of marriage reform can be traced through transformations in and by the colonial court system, African engagements with state-making processes, and formations of “gender justice.” The latter refers to gender-based notions of justice and legal rights, typically as defined by governing and administrative bodies as well as by socioxadpolitical communities. Gender justice went through a period of favoring the rights of women, to a period of favoring patriarchs, to a period of emphasizing the power of the individual—but all within the context of a paternalistic and restrictive colonial state.

Emily S. Burrill is an associate professor in the Department of Women’s and Gender Studies at the University of North Carolina at Chapel Hill and coeditor of Domestic Violence and the Law in Colonial and Postcolonial Africa.