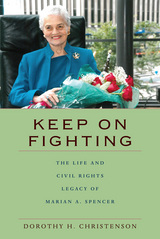 Marian Alexander Spencer was born in 1920 in the Ohio River town of Gallipolis, Ohio, one year after the “Red Summer” of 1919 that saw an upsurge in race riots and lynchings. Following the example of her grandfather, an ex-slave and community leader, Marian joined the NAACP at thirteen and grew up to achieve not only a number of civic leadership firsts in her adopted home city of Cincinnati, but a legacy of lasting civil rights victories.

Of these, the best known is the desegregation of Cincinnati’s Coney Island amusement park. She also fought to desegregate Cincinnati schools and to stop the introduction of observers in black voting precincts in Ohio. Her campaign to raise awareness of industrial toxic-waste practices in minority neighborhoods was later adapted into national Superfund legislation.

In 2012, Marian’s friend and colleague Dot Christenson sat down with her to record her memories. The resulting biography not only gives us the life story of remarkable leader but encapsulates many of the twentieth century’s greatest struggles and advances. Spencer’s story will prove inspirational and instructive to citizens and students alike.

Dorothy H. Christenson is retired from a career in nonprofit program development and administration. Since 1970, she has worked with Marian Spencer at a fair-housing agency, the League of Women Voters, the Charter Committee of Cincinnati, Planned Parenthood, and more.