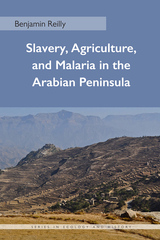 In Slavery, Agriculture, and Malaria in the Arabian Peninsula, Benjamin Reilly illuminates a previously unstudied phenomenon: the large-scale employment of people of African ancestry as slaves in agricultural oases within the Arabian Peninsula. The key to understanding this unusual system, Reilly argues, is the prevalence of malaria within Arabian Peninsula oases and drainage basins, which rendered agricultural lands in Arabia extremely unhealthy for people without genetic or acquired resistance to malarial fevers. In this way, Arabian slave agriculture had unexpected similarities to slavery as practiced in the Caribbean and Brazil.

This book synthesizes for the first time a body of historical and ethnographic data about slave-based agriculture in the Arabian Peninsula. Reilly uses an innovative methodology to analyze the limited historical record and a multidisciplinary approach to complicate our understandings of the nature of work in an area that is popularly thought of solely as desert. This work makes significant contributions both to the global literature on slavery and to the environmental history of the Middle East—an area that has thus far received little attention from scholars.

Benjamin Reilly is an associate teaching professor of history at Carnegie Mellon University’s Qatar campus. He is the author of Disaster and Human History: Case Studies in Nature, Society and Catastrophe and Tropical Surge: A History of Ambition and Disaster on the Florida Shore.