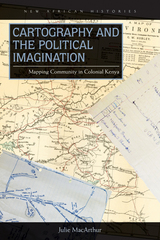 After four decades of British rule in colonial Kenya, a previously unknown ethnic name—“Luyia”—appeared on the official census in 1948. The emergence of the Luyia represents a clear case of ethnic “invention.” At the same time, current restrictive theories privileging ethnic homogeneity fail to explain this defiantly diverse ethnic project, which now comprises the second-largest ethnic group in Kenya.

In Cartography and the Political Imagination, which encompasses social history, geography, and political science, Julie MacArthur unpacks Luyia origins. In so doing, she calls for a shift to understanding geographic imagination and mapping not only as means of enforcing imperial power and constraining colonized populations, but as tools for articulating new political communities and dissent. Through cartography, Luyia ethnic patriots crafted an identity for themselves characterized by plurality, mobility, and cosmopolitan belonging.

While other historians have focused on the official maps of imperial surveyors, MacArthur scrutinizes the ways African communities adopted and adapted mapping strategies to their own ongoing creative projects. This book marks an important reassessment of current theories of ethnogenesis, investigates the geographic imaginations of African communities, and challenges contemporary readings of community and conflict in Africa.

Julie MacArthur is an assistant professor at the University of Toronto. She is the author of Cartography and the Political Imagination as well as numerous articles. She has also worked extensively in African cinema, both as a curator and an academic.