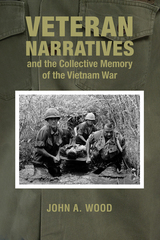 In the decades since the Vietnam War, veteran memoirs have influenced Americans’ understanding of the conflict. Yet few historians or literary scholars have scrutinized how the genre has shaped the nation’s collective memory of the war and its aftermath. Instead, veterans’ accounts are mined for colorful quotes and then dropped from public discourse; are accepted as factual sources with little attention to how memory, no matter how authentic, can diverge from events; or are not contextualized in terms of the race, gender, or class of the narrators.

Veteran Narratives and the Collective Memory of the Vietnam War is a landmark study of the cultural heritage of the war in Vietnam as presented through the experience of its American participants. Crossing disciplinary borders in ways rarely attempted by historians, John A. Wood unearths truths embedded in the memoirists’ treatments of combat, the Vietnamese people, race relations in the United States military, male-female relationships in the war zone, and veterans’ postwar troubles. He also examines the publishing industry’s influence on collective memory, discussing, for example, the tendency of publishers and reviewers to privilege memoirs critical of the war. Veteran Narratives is a significant and original addition to the literature on Vietnam veterans and the conflict as a whole.

John Wood earned a PhD in history from Temple University and lives in Westport, Massachusetts.

TABLE OF CONTENTS
Contents
Acknowledgments
Introduction
1: Who Were the Vietnam Veteran-Memoirists?
2: Combat Conditions and the Vietnamese People
3: Race and Racism
4: Men, Women, and Vietnam
5: The Return Home and Life after Vietnam
6: The Political Content of Veteran Narratives
7: Those Who Came Before and After
Conclusion
Notes
Bibliography
Index