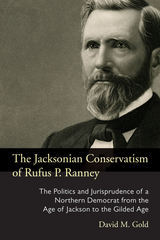 Ohio’s Rufus P. Ranney embodied many of the most intriguing social and political tensions of his time. He was an anticorporate campaigner who became John D. Rockefeller’s favorite lawyer. A student and law partner of abolitionist Benjamin F. Wade, Ranney acquired an antislavery reputation and recruited troops for the Union army; but as a Democratic candidate for governor he denied the power of Congress to restrict slavery in the territories, and during the Civil War and Reconstruction he condemned Republican policies.

Ranney was a key delegate at Ohio’s second constitutional convention and a two-time justice of the Ohio Supreme Court. He advocated equality and limited government as understood by radical Jacksonian Democrats. Scholarly discussions of Jacksonian jurisprudence have primarily focused on a handful of United States Supreme Court cases, but Ranney’s opinions, taken as a whole, outline a broader approach to judicial decision making.

A founder of the Ohio State Bar Association, Ranney was immensely influential but has been understudied until now. He left no private papers, even destroying his own correspondence. In The Jacksonian Conservatism of Rufus P. Ranney, David M. Gold works with the public record to reveal the contours of Ranney’s life and work. The result is a new look at how Jacksonian principles crossed the divide of the Civil War and became part of the fabric of American law and at how radical antebellum Democrats transformed themselves into Gilded Age conservatives.

David M. Gold received his law degree and doctorate in history from the Ohio State University. He is the author of numerous books and articles on legal and political history, including Democracy in Session: A History of the Ohio General Assembly and An Exemplary Whig: Edward Kent and the Whig Disposition in American Politics and Law.

REVIEWS
“Gold’s analysis of Ranney provides a great deal of insight into the ideological world of mid-nineteenth-century northern Democrats and shows how … sectional conflict, war, emancipation, and industrialization transformed ‘radical’ political positions into ‘conservative’ ones in the space of a generation.”—Austin Allen, University of Houston–Downtown