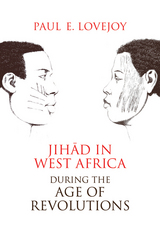 In Jihād in West Africa during the Age of Revolutions, a preeminent historian of Africa argues that scholars of the Americas and the Atlantic world have not given Africa its due consideration as part of either the Atlantic world or the age of revolutions. The book examines the jihād movement in the context of the age of revolutions—commonly associated with the American and French revolutions and the erosion of European imperialist powers—and shows how West Africa, too, experienced a period of profound political change in the late eighteenth through the mid-nineteenth centuries. Paul E. Lovejoy argues that West Africa was a vital actor in the Atlantic world and has wrongly been excluded from analyses of the period.

Among its chief contributions, the book reconceptualizes slavery. Lovejoy shows that during the decades in question, slavery expanded extensively not only in the southern United States, Cuba, and Brazil but also in the jihād states of West Africa. In particular, this expansion occurred in the Muslim states of the Sokoto Caliphate, Fuuta Jalon, and Fuuta Toro. At the same time, he offers new information on the role antislavery activity in West Africa played in the Atlantic slave trade and the African diaspora.

Finally, Jihād in West Africa during the Age of Revolutions provides unprecedented context for the political and cultural role of Islam in Africa—and of the concept of jihād in particular—from the eighteenth century into the present. Understanding that there is a long tradition of jihād in West Africa, Lovejoy argues, helps correct the current distortion in understanding the contemporary jihād movement in the Middle East, Afghanistan, Pakistan, and Africa.

Paul E. Lovejoy is Distinguished Research Professor, Department of History, York University, and Fellow of the Royal Society of Canada. He was the founding director of the Harriet Tubman Institute for Research on Africa and Its Diasporas at York University and has published more than thirty books, including Transformations in Slavery.

TABLE OF CONTENTS
Cover
CONTENTS
TABLES
MAPS
PLATES
ACKNOWLEDGMENTS
GLOSSARY
ORTHOGRAPHY
INTRODUCTION
1. THE AGE OF REVOLUTIONS AND THE ATLANTIC WORLD
2. THE ORIGINS OF JIHĀD IN WEST AFRICA
3. THE JIHĀD OF ʿUTHMĀN DAN FODIO IN THE CENTRAL BILĀD AL-SŪDĀN
4. THE ECONOMIC IMPACT OF JIHĀD IN WEST AFRICA
5. JIHĀD AND THE SLAVE TRADE
6. THE REPERCUSSIONS OF JIHĀD IN THE AMERICAS
7. SOKOTO, THE JIHĀD STATES, AND THE ABOLITION OF THE ATLANTIC SLAVE TRADE
8. EMPOWERING HISTORY
APPENDIX
NOTES
BIBLIOGRAPHY
INDEX