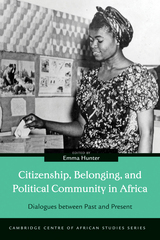 Africa, it is often said, is suffering from a crisis of citizenship. At the heart of the contemporary debates this apparent crisis has provoked lie dynamic relations between the present and the past, between political theory and political practice, and between legal categories and lived experience. Yet studies of citizenship in Africa have often tended to foreshorten historical time and privilege the present at the expense of the deeper past.

Citizenship, Belonging, and Political Community in Africa provides a critical reflection on citizenship in Africa by bringing together scholars working with very different case studies and with very different understandings of what is meant by citizenship. By bringing historians and social scientists into dialogue within the same volume, it argues that a revised reading of the past can offer powerful new perspectives on the present, in ways that might also indicate new paths for the future.

The project collects the works of up-and-coming and established scholars from around the globe. Presenting case studies from such wide-ranging countries as Sudan, Mauritius, South Africa, Côte d’Ivoire, and Ethiopia, the essays delve into the many facets of citizenship and agency as they have been expressed in the colonial and postcolonial eras. In so doing, they engage in exciting ways with the watershed book in the field, Mahmood Mamdani’s Citizen and Subject.

Emma Hunter is a lecturer in African history at the University of Edinburgh. Previously, she was a lecturer in history at Gonville and Caius College, Cambridge. She is the author of Political Thought and the Public Sphere in Tanzania: Freedom, Democracy and Citizenship in the Era of Decolonization.

TABLE OF CONTENTS
Contents
Acknowledgments
Introduction
1: Unhelpful Pasts and a Provisional Present
Part 1: Citizens and Subjects in African History
2: Rethinking Citizenship and Subjecthood in Southern Africa
3: “We Are Oppressed and Our Only Way Is to Write to Higher Authority”
4: Burundi, 1960–67
Part 2: Citizenship and the Postcolonial State
5: “Double Nationalité” and Its Discontents in Ivory Coast, 1963–66
6: The Nubians of Kenya
7: Divided Loyalties and Contested Identities
Part 3: Citizenship in Contemporary Africa
8: The Ethnic Language of Rights and the Nigerian Political Community
9: The State and the “Peoples”
10: Ethnicity and Contested Citizenship in Africa
Postscript
Contributors
Index