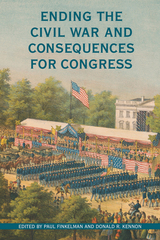 The social changes and human and economic costs of the Civil War led to profound legal and constitutional developments after it ended, not least of which were the Fourteenth and Fifteenth Amendments and the many laws devised to protect the civil rights of newly freed African Americans. These amendments and laws worked for a while, but they were ineffective or ineffectively enforced for more than a century.

In Ending the Civil War and the Consequences for Congress, contributors explore how the end of the war both continued the trauma of the conflict and enhanced the potential for the new birth of freedom that Lincoln promised in the Gettysburg Address. Collectively, they bring their multidisciplinary expertise to bear on the legal, economic, social, and political aspects of the aftermath of the war and Reconstruction era. The book concludes with the reminder of how the meaning of the war has changed over time. The Civil War is no longer the “felt” history it once was, Clay Risen reminds us, and despite the work of many fine scholars it remains contested.