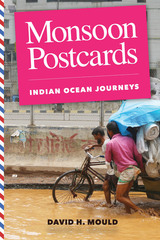 In Monsoon Postcards, journalist David H. Mould, notebook in hand, traverses the Indian Ocean—from Madagascar through India and Bangladesh to Indonesia. It’s an unpredictable journey on battered buses, bush taxis, auto-rickshaws, and crowded ferries. Mould travels from the traffic snarls of Delhi, Dhaka, and Jakarta to the rice paddies and ancestral tombs of Madagascar’s Central Highlands; from the ancient kingdom of Hyderabad to India’s so-called chicken neck—the ethnically diverse and underdeveloped northeast; and from the textile factories and rivers of Bangladesh to the beaches of Bali and the province of Aceh—ground zero for the 2004 tsunami.

Along the way, in markets, shops, roadside cafes, and classrooms, he meets journalists, professors, students, aid workers, cab drivers, and other everyday residents to learn how they view their past and future. Much like its predecessor, Mould’s Postcards from Stanland,Monsoon Postcards offers witty and insightful glimpses into countries linked by history, trade, migration, religion, and a colonial legacy. It explores how they confront the challenges of climate change, urban growth, economic development, land, water and natural resources, and national and ethnic identity.

David H. Mould, professor emeritus of media arts and studies at Ohio University, has traveled widely in Asia and southern Africa as a trainer, consultant, and researcher. He has written articles and essays for many print and online publications. Born in the United Kingdom, he worked as a newspaper and TV journalist before moving to the United States in 1978.

TABLE OF CONTENTS
Contents
Illustrations
1: Traveling with a Purpose
2: Indian Ocean World
3: Land of the Merina
4: On and Off the Road in Madagascar
5: Inexplicable India
6: A Tale of Three Cities
7: The Seven Sisters
8: Joy Bangla (Victory to Bengal)
9: Swimming to Bangladesh
10: On the Road and on the Water
11: Improbable Indonesia
12: East of Boston
Acknowledgments
Notes
Index