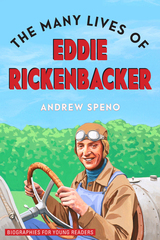 The life story of a daredevil who became a war hero will fascinate adventurous young readers with its tales of survival.

At age thirteen, following the death of his father, young Eddie dropped out of school and joined the workforce. Through a combination of smarts, hard work, and perseverance, Rickenbacker would grow up to become an automobile mechanic, a race car driver, a fighter pilot, an entrepreneur, a war hero, a business executive, and a staunch advocate for hard work and personal responsibility.

Along the way he lived on the line between recklessness and courage. He survived dozens of accidents, coming close to death more than once. During the earliest years of American automobile racing, Rickenbacker was “the most daring and withal the most cautious driver” on the circuit. How could he have been both daring and cautious? This book invites young readers to decide for themselves as they follow Rickenbacker on his many hair-raising adventures.

Andrew Speno is a teacher and the author of The Great American Foot Race. He enjoys cooking, listening to live music, attending live theater, and playing Go. He and his family live in Cincinnati.

TABLE OF CONTENTS
Contents
Author’s Note
1: Black Sheep of the Family
2: Man of the House
3: Moving Up in the World
4: King of the Dirt-Track Racers
5: Hat in the Ring
6: Ace of Aces
7: Grounded
8: At the Controls
9: Mayday
10: Descent and Landing
Timeline
Captain Eddie’s Advice to Young People, 1953
Glossary
Acknowledgments
Notes
Bibliography