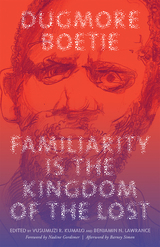 The picaresque hero of this novel, Duggie, is a dispossessed black street kid turned con man. Duggie’s response to being confined to the lowest level of South Africa’s oppressive and humiliating racial hierarchy is to one-up its absurdity with his own glib logic and preposterous schemes. Duggie’s story, as one critic puts it, offers “an encyclopedic catalogue of rip-offs, swindles, and hoaxes” that regularly land him in jail and rely on his white targets’ refusal to admit a black man is capable of outsmarting them.

Duggie exploits South Africa’s bureaucratic pass laws and leverages his artificial leg every chance he gets. As “a worthless embarrassment to the authorities and a bad example to the convicts,” Duggie even manages to get himself thrown out of jail. From Duggie’s Depression-era childhood in urban Johannesburg to World War II and the rise of the white supremacist apartheid regime to his final, bitter triumph, Boetie’s narrative celebrates humanity’s relentless drive to survive at any cost.

This new edition of Boetie’s out-of-print classic features a recently discovered photograph of the author, an introduction replete with previously unpublished research, numerous annotations, and is accompanied by Lionel Abrahams’ haunting poem, “Soweto Funeral,” composed after attending Boetie’s interment, all of which render the text accessible to a new generation of readers.

Benjamin N. Lawrance is an author and editor of eleven books, and editor in chief of the African Studies Review. He is professor of History at the University of Arizona.