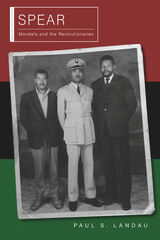 A revelatory and definitive account of how Nelson Mandela and his peers led South Africa to the brink of revolution against the postwar twentieth century’s most infamously racist regime.

Spear: Mandela and the Revolutionaries brings to life the brief revolutionary period in which Nelson Mandela and his comrades fought apartheid not just with words but also with violence.

After the 1960 Sharpeville police shootings of civilian protesters, Mandela and his comrades in the mass-resistance order of the African National Congress (ANC) and the Communist Party pioneered the use of force and formed Umkhonto we Sizwe (MK), or Spear of the Nation. A civilian-based militia, MK stockpiled weapons and waged a war of sabotage against the state with pipe bombs, Molotov cocktails, and dynamite. In response, the state passed draconian laws, militarized its police, and imprisoned its enemies without trial.

Drawing from several hundred first-person accounts, most of which are unpublished, Paul Landau traces Mandela’s allies—and opponents—in communist, pan-Africanist, liberal, and other groups involved in escalating resistance alongside the ANC. After Mandela’s capture, the Pan Africanist Congress planned to initiate street violence, and MK organized Operation Mayibuye, an uprising to be led by trained commandos. The state short-circuited those plans and subsequently jailed, exiled, tortured, and murdered revolutionaries. The era of high apartheid then began.

Spear reshapes our understanding of Mandela by focusing on this intense but relatively neglected period of escalation in the movement against apartheid. Landau’s book is not a biography, nor is it a history of a militia or an army; rather, it is a riveting story about ordinary civilians debating and acting together in extremis. Contextualizing Mandela and MK’s activities amid anticolonial change and Black Marxism in the early 1960s, Spear also speaks to today’s transnational antiracism protests and worldwide struggles against oppression.

Paul S. Landau is a professor of history at the University of Maryland at College Park and a fellow of the History Centre of the University of Johannesburg. His two previous books, The Realm of the Word: Language, Gender, and Christianity in a Southern African Kingdom(1995) and Popular Politics in the History of South Africa, 1400–1948 (2010), were both finalists for the African Studies Association Herskovits Prize. Landau is interested in visual culture, religion, and popular politics. He lives with his family in Washington, DC.