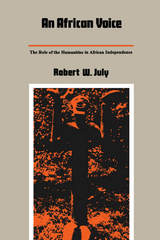 Through the work of leading African writers, artists, musicians and educators—from Nobel prizewinner Wole Soyinka to names hardly known outside their native lands—An African Voice describes the contributions of the humanities to the achievement of independence for the peoples of black Africa following the Second World War. While concentrating on cultural independence, these leading humanists also demonstrate the intimate connection between cultural freedom and genuine political economic liberty.
TABLE OF CONTENTS