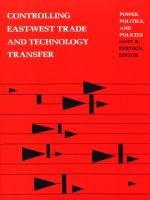 Western efforts to control trade and technological relations with communist countries affect many interests and political groups in both Eastern and Western blocs. Although there is general agreement within the Western alliance that government-imposed controls are necessary to prevent material having military importance from falling in the hands of the Soviet Union and its Warsaw Pact allies, there is considerable controversy over the specifics: the exact definition of &quot;militarily significant&quot; material, how the Western nations should administer controls, the implications of glasnost, and other matters.
REQUEST ACCESSIBLE FILE