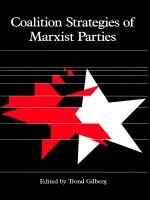 During the early part of this decade, many individuals, both policy makers and scholars, wondered about the &quot;new look&quot; of some communist parties as they billed themselves as potential participants in the pluralistic game of politics in many parts of the world. This image was certainly different from the old notion of dedicated revolutionaries who scornfully rejected the existing order and plotted its overflow. How genuine was the new look? Were the communists sincere when they discussed interaction with other elements of political order in which they operated? What were their tactical policies in pursuit of these strategic goals? Some of us began to examine these questions more systematically. We ran a panel at an academic conference, enjoyed the feedback from our colleagues, and began the process of writing this book. Now, several years later, it is a finished product, after many full-scale revisions and updates. The topic is still very relevant, and that shows the enduring importance of the questions asked a number of years ago. Scholars will need to return to this question in the future; perhaps the best strategy is a continuous examination of this crucial subject.
REQUEST ACCESSIBLE FILE