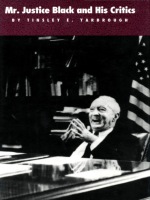 Many jurists give lip service to the idea that judicial interpretation of constitutional provisions should be based on the intent of the framers. Few, if any, have been as faithful to that conception as Hugo Black. As U.S. senator from Alabama, Black was a vigorous critic of the Supreme Court's use of the Constitution as a weapon against the Roosevelt New Deal. Once on the court he played a leading role in overturning those decisions and in attempting to establish for freedom of speech and other guarantees the interpretation he (and others) believe was warranted by the language and intent of the framers.
Late in his career, however, Black's commitment to literalism and intent led him to assume apparently conservative positions in civil liberties cases. In an era characterized by growing acceptance of the belief that judges should adapt the Constitution to changing social and ethical perceptions, many came to regard Black's position as unrealistic and irrelevant.
Tinsley E. Yarbrough analyzes Black's judicial and constitutional philosophy, as well as his approach to specific cases, through the eyes of Black's critics (such as Justices Frankfurter and Harlan) and through an assessment of scholarly opinion of his jurisprudence. The result is a stimulating and provocative addition to the study of Justice Black and the Supreme Court.
REQUEST ACCESSIBLE FILE