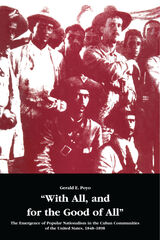 Cuban-Americans are beginning to understand their long-standing roots and traditions in the United States that reach back over a century prior to 1959. This is the first book-length confirmation of those beginnings, and its places the Cuban hero and revolutionary thinker José Martí within the political and socioeconomic realities of the Cuban communities in the United States of that era. By clarifying Martí’s relationship with those communities, Gerald E. Poyo provides a detailed portrait of the exile centers and their role in the growth and consolidation of nineteenth-century Cuban nationalism.
Poyo differentiates between the development of nationalist sentiment among liberal elites and popular groups and reveals how these distinct strains influenced the thought and conduct of Martí and the successful Cuban revolution of the 1890s.
REVIEWS
&ldquo;A solid, interesting, and original study of the consolidation of the nationalist ideal in Cuban revolutionary thought. It is a political/intellectual history that links the evolution of ideology to its social base in exile&mdash;an essential task in the reinterpretation of Cuban history. It draws on a wide range of sources, and is carefully argued. The work will be of interest to scholars of nationalism, of immigrant groups, and of revolutionary ideology, [and] is a significant contribution to the historiography on Cuba.&rdquo;&mdash;Rebecca Scott