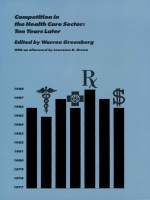 “Competition. Deregulation. Free market forces. The debate over competition in health care that raged in the 1970s brought with it a new economic jargon, a vocabulary of concepts and issues unheard of in hospitals a decade earlier.
“Competition in health care has developed to a greater degree than most economists predicted ten years ago. That is the conclusion of Warren Greenberg in his introduction to Competition in the Health Care Sector: Ten Years Later, a retrospective of a 1977 Federal Trade Commission conference, which produced the landmark treatise Competition in the Health Care Sector: Past, Present, and Future. Seven of the ten original papers are reexamined; a chapter on the nursing home industry has been added.
“As with the original volume, Greenberg predicts that the retrospective will become a critical element in the health care economic literature.”—Hospitals
REQUEST ACCESSIBLE FILE