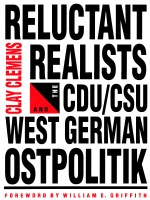 This is a study of the evolution of the West German Christian Democratic Union/Christian Social Union (CDU/CSU) approach to relations with the Soviet bloc (and particularly East Germany), from fierce antagonism to any accommodation with Communist regimes in 1969 to the growing acceptance of the necessity for rapprochement in the 1980s. Clay Clemens, basing his analyses on interviews with leading political figures as well as on party documents, examines the party&rsquo;s changing ostpolitik position during the period in which it was in opposition (1969-82) and assesses the factors&mdash;international, domestic, and interparty&mdash;that brought about a change in that policy. A concluding section deals with events since 1982.
REQUEST ACCESSIBLE FILE