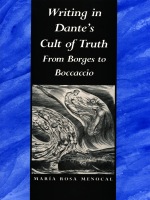 Using the works of Dante as its critical focus, María Rosa Menocal’s original and imaginative study examines questions of truth, ideology, and reality in poetry as they occur in a series of texts and in the relationship between those texts across time. In each case, Menocal raises theoretical issues of critical importance to contemporary debates regarding the structure of literary relations.
Beginning with a reading of La vita nuova and the Commedia, this literary history of poetic literary histories explores the Dantean poetic experience as it has been limited and rewritten by later poets, particularly Petrarch, Boccaccio, Borges, Pound, Eliot, and the all but forgotten Silvio Pellico, author of Le mie prigioni. By blending discussions of Dante’s own marriage of literature and literary history with those investigations into the imitative qualities of later works, Writing in Dante’s Cult of Truth presents an intertextual literary history, one which seeks to maintain the uncanniness of literature, while imagining history to be neither linear nor clearly distinguishable from literature itself.
TABLE OF CONTENTS
Contents
Prologue: Wilderness
I. Synchronicity: Death and the Vita nuova
II. Bondage: Pellico's Francescas
III. Faint Praise and Proper Criticism: The miglior fabbri
IV. Blindness: Alephs and Lovers
Epilogue: Liberation: Galeotto and Doubt
Works Cited
Index
REQUEST ACCESSIBLE FILE