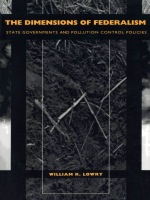 The resurgence of state involvement in policymaking in recent years has renewed a long-standing debate about the most effective role for states within a federal system of government. In The Dimensions of Federalism, William R. Lowry assesses and examines the responsiveness and innovation of state governments in the area of air and water pollution control policies. Building a theoretical model that demonstrates the relationship between state and federal governments, Lowry combines econometric analysis of data on all fifty states with an in-depth study of a leading state in each of four major areas of pollution policy to conclude that state policymakers will often experiment and willingly improve upon federal pollution control standards. But this willingness is tempered, he maintains, both by a fear of losing important constituents to interstate competition and by the difficulty of coordinating efforts and disseminating information without the active involvement of the federal government. Originally published in 1992, this book continues to be pertinent in a political climate that will inevitably see an increased role for states in domestic policymaking. It will be of great interest to students and scholars of American public policy, federalism, and environmental politics and policy.
AUTHOR BIOGRAPHY

REVIEWS
&ldquo;An original and informative analysis of comparative state environmental policy, and in particular the conditions for innovative state leadership in this policy area. Lowry anchors his work well in the scholarly literature, and he contributes to that literature in many important ways.&rdquo; &mdash;Michael Kraft, University of Wisconsin, Green Bay