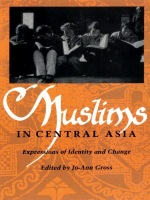 Central Asia is distinctive in its role as a frontier region in which a unique diversity of cultural, religious, and political traditions exist. This collection of essays by expert scholars in a range of disciplines focuses on the formation of ethnic, religious, and national identities in Muslim societies of Central Asia, thus furthering our general understanding of the history and culture of this significant region.
This study includes several geopolitical regions—Chinese Central Asia, Soviet Central Asia, Afghanistan, Transoxiana and Khurasan—and covers historical periods from the fifteenth century to the present. Drawing on scholarship in anthropology, religion, history, literature, and language studies, Muslims in Central Asia argues for an interdisciplinary, inter-regional dialog in the development of new approaches to understanding the Muslim societies in Central Asia. The authors creatively examine the social construction of identities as expressed through literature, Islamic discourse, historical texts, ethnic labels, and genealogies, and explore how such identities are formed, changed, and adopted through time.

Introduction: Approaches to the Problem of Identity Formation / Jo-Ann Gross 1

I. The Shaping and Reshaping of Identity

1. The Development and Meaning of Chaghatay Identity / Beatrice Forbes Manz 27

2. Religious, National, and Other Identities in Central Asia / Muriel Atkin 46

II. Islam as a Source of Identity

4. The Hui, Islam, and the State: A Sufi Community in China's Northwest Corner / Dru C. Gladney 89

6. Islam in a Changing Society: The Khojas of Eastern Turkistan / Isenbike Togan 134

III. Discourse as a Cultural Expression of Identity

7. Beyond Renewal: The Jadid Response to Pressure for Change in the Modern Age / Edward J. Lazzerini 151

9. Abdullah Quadiriy and the Bolsheviks: From Reform to Revolution / Christopher Murphy 190