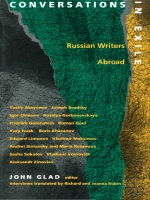 An entire generation of Russian writers have been living in exile from their homeland. Although today's glasnost has special meaning for many of these banished writers, it does not dissolve their experience of forced separation from their country of origin. In Conversations in Exile, John Glad brings together interviews with fourteen prominent Russian writers in exile, all of whom currently live in the United States, France, or Germany. Conducted between 1978 and 1989, these frank and captivating interviews provide a rich and complex portrait of a national literature in exile.
Glad's introduction situates the three distinct waves of westward emigration in their historical and political framework. Organized by genre, the book begins with discussions with the older generation of writers and then moves on to more recent arrivals: the makers of fantasy and humor, the aesthetes, the moralists, and the realists. Each voice is compelling for its invaluable testimony--some reveal startling insights into the persecution of dissidents under Soviet rule while others address the relationship between creativity, writing, and conditions of exile. Taken together these interviews reveal the range of modern Russian writing and document the personalities and positions that have made Russian writers in emigration so diverse, experimental, and controversial.

Excerpt
John Glad: You're a Russian poet but an American essayist. Does that bring on any measure of split personality? Do you think you are becoming less and less Russian?
Joseph Brodsky (recipient of 1987 Nobel Prize for Literature): That's not for me to say. As far as I'm concerned, in my inner self, inside, it feels quite natural. I think being a Russian poet and an American essayist is an ideal situation. It's all a matter of whether you have (a) the heart and (b) the brains to be able to do both. Sometimes I think I do. Sometimes I think I don't. Sometimes I think that one interferes with the other.

2. Makers of Fantasy and Humor